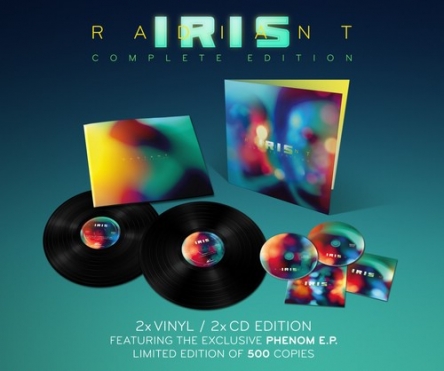 There you have it: a band releases an absolute electronic masterpiece of an album only to practically vanish into thin air afterwards. This is what happened to IRIS, the American duo that issued Electro Pop manifest "Blacklight" in 2010. On the succeeding US-tour however, Andrew Sega and singer Reagan Jones fell out with each other, so the project was put on hold - actually forever. What followed was a long period of silence in which each musician went his own way. At one point though, a small spark was ignited when Reagan Jones sent Sega sketches for three songs. This spark rapidly grew when the two decided to work on another studio album yet again. As the songs took shape, became distinctly more dense, powerful and sophisticated, an album title came up: "Radiant", remembers Andrew Sega. "It is the story of a man who all of a sudden sees his world within a new environment and realises how bright and radiant it can truly be, if one looks upon it with different eyes."

With "Radiant", IRIS have been reborn, so to say, which also explains the warmth and radiant quality of the album cover, which comes in bright colours, maybe even the feeling at its core, which is best described by attributes such as "warm", "flattering" or "harmonious". And even though the compositions carry an air of Zen-like calm and pliability, at least after several listens, "Radiant" captivates with one quality which many other albums in this genre lack: depth. Reagan Jones' vocals lead Andrew Sega's harmonious electronic arrangements and not only give them emotion, but also a feeling one would rather associate with the old 4AD classics: an Ambient-like poise, warmth and sparkling quality of which you can hardly get enough. Maybe it is Radiant's decisive quality that IRIS never adjust their songs to the typical Synthpop earcatcher that makes many genre colleagues seem like bland copies of great English predecessors. With IRIS, the hook practically comes in passing while as a listener, you are truly bathing in their music - or rather: you sit in a limousine and are taken through a strange, shining metropolis by night, marvelling hat the big city lights while driving through illuminated streets and skyscraper canyons. An absolutely fabulous album, the product of a special band chemistry, which Sega explains this way: "Reagan and me, we are two very different characters, just like two opposing forces. Iris is the place in which these forces unite to create something special, and when this dichotomy turns into a synergy, the result is simply something beautiful like 'Radiant'."